How many students will receive a report card on June 28, 2089? The labor market and depopulation know only

Home - Blog  - How many students will receive a report card on June 28, 2089? The labor market and depopulation know only 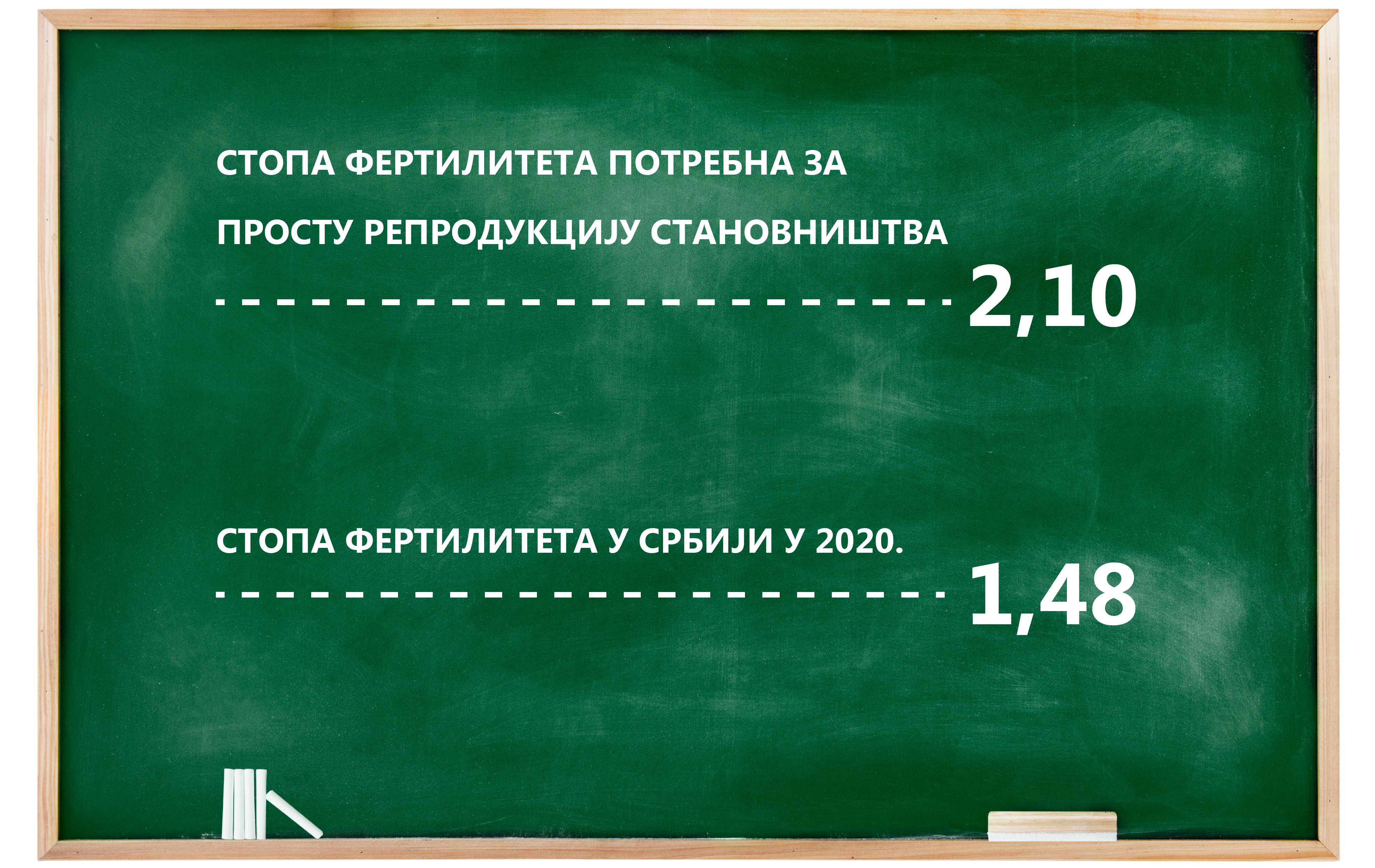 How many students will receive a report card on June 28, 2089? The labor market and depopulation know only

The growth of women’s participation in the labor market in the world, including in the Republic of Serbia, in addition to the undoubtedly positive effects on the growth and development of the economy, the improvement of the standard of living and the reduction of the risk of poverty, has also had its negative effects. Unpaid housework remained mainly on women’s shoulders, and these women, in addition to paid work, also take care of the household, family, children, and elderly members of the household. This also influenced the increasingly frequent preference for smaller families, with one or two children. The employment rate of women follows the trend of women’s participation rate in the labor market. Both grew throughout the 20th century, while the growth trend has slowed in the last 20 years. Women are much more likely to do unpaid work at home or work in the gray area in underdeveloped countries. Policies establishing a balance between private and business life and encouraging the division of housework can positively affect women’s activity in the labor market.

POLICIES ESTABLISHING A BALANCE BETWEEN PRIVATE AND WORKING LIFE AND ENCOURAGING THE DIVISION OF HOUSEHOLD WORK CAN HAVE A POSITIVE INFLUENCE ON THE ACTIVITY OF WOMEN IN THE LABOR MARKET.

In order to raise society’s awareness of the burden that women carry and ease it for them, developed countries are beginning to develop social policies aimed at families with children. In the period after the Second World War, European countries are increasingly working on the development and improvement of these policies. They expected that the development of social policies would reduce the effect of depopulation. However, it turns out that it is necessary to work in many fields in order to reduce these effects. Despite the developed policies, in most European countries the fertility rate is lower than necessary for simple reproduction. Numerous factors are behind this fact, and some of them are: the need for families to provide their children with a better standard of living, greater commitment through families with fewer children, women’s education that allows them better-paid jobs, etc. There are also risks of career stalling or slowing down after childbirth, loss of status at work, reduction in earnings and the like. Precisely for these reasons, women in developed countries choose to have children later and have fewer children.

Serbia, as a developing country, has a very low fertility rate. In order to increase the fertility rate, numerous policies were introduced in the previous period that should provide support to mothers. However, it is necessary to develop additional policies in the direction of long-term provision of mothers’ economic security. This can be achieved by providing incentives for employers to keep mothers at work after returning from maternity and/or childcare leave. That is why our task at the Institute for Development and Innovation was to study the existing policies toward parents in developed countries, to see their impact on the fertility rate, and propose an economic policy measure that has the potential to positively influence the fertility rate in the Republic of Serbia.

SERBIA, AS A DEVELOPING COUNTRY, HAS A VERY LOW FERTILITY RATE OF 1.48, AND IN ORDER FOR THIS RATE TO INCREASE, IT IS NECESSARY TO DEVELOP ADDITIONAL POLICIES TO ENSURE THE LONG-TERM ECONOMIC SECURITY OF MOTHERS.

The economic policy measure proposed by the Institute for Development and Innovation, in order to protect women after returning from childcare leave, is subsidizing mandatory social security contributions. Policies to reduce labor costs, which can positively affect the position of women after childbirth in the labor market, are subsidizing total contributions for pension and disability insurance, health insurance, and unemployment insurance. The measure involves a three-year reduction in contributions for pension, disability, health, and unemployment insurance for women who return to work after maternity leave and/or leave from work to care for a child. Also, the measure would cover unemployed or inactive mothers, who get a job until the child reaches the second year of life. In the first year, the subsidization of mandatory contributions for social insurance would amount to 65%, in the second 60%, and in the third 50%.

The measure implies a reduction in contributions both at the expense of the employer and at the expense of the employee. For example, if this measure exists in 2022, if the total cost for the employer (gross 2) of a working mother with a net salary of 57,735 dinars is 92,465 dinars, after the introduction of subsidies it will amount to 65,454 dinars in the first year, and 67,531 dinars in the second year and in the third year 71,687 dinars.

The use of this measure would follow the employer’s obligation not to fire the mother after returning from child care leave as long as she receives a state subsidy. In the event that the employee voluntarily leaves the job due to finding another job, she transfers the subsidy with her, and the employer is not obliged to return the funds received on the basis of the subsidy. However, in the event of mutual termination of the employment relationship, and the employee does not have a new job, the employer will be obliged to return the entire amount of the received subsidy to the state. In this way, an additional measure of protection for mothers after returning to work is introduced. The measure would also cover entrepreneurs, as well as unemployed and inactive mothers who get a job in the period after childbirth until the child’s second year.

Multiple positive effects include the long-term retention of mothers’ jobs, the incentive to employ those who were unemployed before giving birth, the reduction of mothers’ financial dependence and the possibility of their career development. The mentioned measure is an incentive for employers to keep mothers in their workplace in the long term. A positive effect will also be achieved by employers who hire mothers who were unemployed or inactive on the labor market before giving birth. In this way, the unemployment of mothers will be reduced and the possible risks of exposure to financial dependence and poverty will be reduced. By introducing the proposed measure, a clear signal is sent to women that the state cares about their financial future and understands the problems they face in the labor market. By introducing the mentioned measure, the state would show that it supports women in their career development.

The proposed measure also benefits companies, whose operating costs will be reduced. Bearing in mind that the measure is intended for businesses, the state shows that it understands employers and the challenges they face in the business process. The Serbian economy is dominated by micro, small and medium enterprises (99% of the economy), which contribute almost 58% to the gross domestic product. This group of enterprises employs 65% of the employees. Therefore, it is important to enable their survival on the market and to facilitate their business as much as possible. An important element of that process is the possibility of reducing labor costs. In order for micro, small and medium-sized enterprises to have an incentive to retain mothers after returning from maternity leave and/or child care leave, it is necessary to provide a certain type of incentive. Subsidy for mandatory social insurance contributions is a type of incentive that will mean business precisely because it reduces labor costs, i.e. business costs.

THE SERBIAN ECONOMY IS DOMINATED BY MICRO, SMALL AND MEDIUM-SIZED ENTERPRISES (99% OF THE ECONOMY), WHICH CONTRIBUTE ALMOST 58% TO THE GROSS DOMESTIC PRODUCT. THIS GROUP OF COMPANIES EMPLOYS 65% OF THE EMPLOYEES. THEREFORE IT IS IMPORTANT TO ENABLE THEIR SURVIVAL ON THE MARKET AND TO MAKE THEIR BUSINESS AS EASY AS POSSIBLE.

The proposed measure would have benefits for society, but it also requires costs. Improving the position of mothers in the labor market can be achieved by introducing a fiscal policy measure of subsidies on contributions for mandatory social insurance at the expense of the employee and the employer. In order to estimate the costs, we created three scenarios. The first scenario is a conservative scenario that assumes that the introduction of the measure does not lead to significant changes in the labor market, so the costs of the subsidy in the third year would be 298.1 million euros, and the measure would cover about 118 thousand mothers. According to the second scenario, the positive effects of the measure on the labor market are more noticeable in the second and third years of the measure’s application compared to Scenario 1. The moderately optimistic Scenario 2 predicts that the costs of the introduced subsidy will reach the level of 321.2 million euros in the third year, and the measure would include 127 thousand mothers. The third scenario is the most optimistic scenario in the sense that the significant effects of the introduced measure on the labor market are already visible in the first year. The costs of the measure in the third year according to Scenario 3 amount to 336.4 million euros, and it is estimated that 133 thousand mothers would be covered.

DEPENDING ON THE SCENARIO, THE COSTS OF IMPLEMENTING THE PROPOSED MEASURE WOULD AMOUNT FROM 298 TO 336 MILLION EUROS PER YEAR.

Subsidizing the payment of mandatory social insurance contributions should provide mothers with three-year protection against job loss, and will have a positive impact on female entrepreneurship, as well as reducing the risk of poverty and improving working conditions for mothers. Reducing the labor costs of working mothers will reduce their labor costs, which opens up space to increase their earnings and reduce the wage gap between men and women. Bearing in mind that the labor supply in Serbia is modest, all measures that encourage the growth of the labor force are welcome. The additional employment of mothers will also have a positive impact on the country’s gross domestic product.

The proposed measure of introducing subsidies for the payment of mandatory social security contributions is unique in terms of the combination of labor market policy, gender equality, and demography. There is no country in Europe that has decided to implement this policy of improving three extremely important social areas. Serbia would be the first country that would stimulate demography, gender equality, and economic activity through the introduction of subsidies for mandatory social security contributions. In the short term, the costs of the measure will be greater than the benefits, but in the long term, society as a whole will benefit.

Author: Institute for Development and Innovation