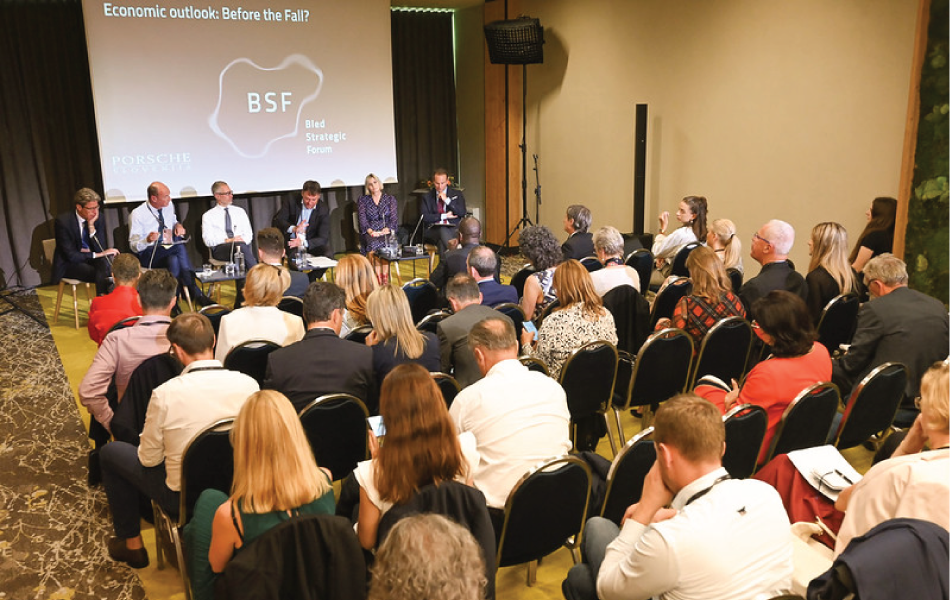 The Bled Strategic Forum, is an opportunity for the exchange of opinions between those who create policies and those who monitor policy proposals, evaluate them and propose improvements, but also to the wider public. They talked about the current state of democracy in the world, with an emphasis on Europe, human rights, and international relations, and the dominant topic was the war in Ukraine and its consequences. Some of them we already live with, and some of them we can only talk about in the abstract. The question of the architecture of the world after surviving the pandemic and after the end of the war is also open. They talked about the current economic situation both in the European Union and in the world.

THIS YEAR WILL SHOW “THREE PERSONS OF ECONOMY”

On the panel, the participants were the representative of the European Bank for Reconstruction and Development Mark Bowman, the representative of the Slovenian Ministry of Finance Katja Lautar, the chairman of the International Academy for Economic and Social Development from Italy Valerio de Luca, the representative of the European Parliament dealing with tax issues Paul Tang and the governor of Slovenia bank Boštjan Vasla, it was concluded that we are going through difficult economic times and that the current year will show its worst face. The beginning of the year was extremely positive. Economies began to recover from the consequences of the coronavirus pandemic, new jobs were created, and countries began to reach growth rates similar to those before the pandemic. However, on February 24, the unexpected happened, an aggression that shook the world into recovery. The year shows a different face, the growth rates are slowing down, but we are still held by the rush from the beginning, which slowly subsides and prepares us for a new face, which we are not sure what it will look like. The only thing that is certain is that it will be uglier than the previous two. We will face high energy prices, rising inflation, which is already there and will be present next year, as well as gas shortages. The panelists’ estimates are that inflation will be extremely high in the coming quarters and that we can expect its gradual slowdown and subsequent decline only at the end of next year. No one was optimistic about the end of the current year, everyone expects a negative result. The only question is how bad it will be, and how much the fall will be. The size of the drop depends on the energy market and private consumption.

Jerome Powell announced in America to prepare for a period full of sweat, blood, and tears. The situation in Europe will not get better, and how it will deal with the coming crisis will determine the position of Europe in the future. It is clear what kind of winter is ahead of us and that it will not be easy anywhere. The European Union is preparing, announcements can be heard about the difficulty of the upcoming period, the focus of which is the topic of a possible energy deficit and the crisis in this market.

It is already becoming clear that the main topic was the energy sector and above all the situation in this sector in Europe, which is dependent on Russian energy sources. Questions that are open concern investments in this sector, in terms of increasing efficiency, cleaner, renewable and green energy sources.

THE CLEAR MESSAGE IS THAT THOSE WHO HAVE FUNDS SHOULD INVEST IN THE ENERGY SECTOR. THE FUTURE ROLE OF THE EUROPEAN UNION IN THE WORLD DEPENDS EXACTLY ON THE CURRENT METHOD OF MANAGING THE CRISIS IN THE ENERGY SECTOR – IS ONE OF THE CONCLUSIONS OF THE FORUM.

Europe needs quick and effective solutions in this regard right now. One that comes up is the gas price cap. This is only a short-term solution, where the state will have to compensate for the difference between the market price of gas and the one it has limited. The duration of this measure depends on the available state budgets. Therefore, an active role of the state in the market is expected in the future. What will be the consequences of such policies remains to be seen. The risk that comes with the measure of limiting the price of energy products is that it may result in an increase in demand.

In addition to the energy market, the issue of the chip market also came up. Europe is completely dependent on foreign countries, most of all on Taiwan, when it comes to the supply of chips. We have already faced a crisis of chip shortages in the market and rising prices of technology, which is a consequence of the supply chain crisis that occurred during the pandemic. The plan is to work on reducing dependence on other countries when it comes to the technology market through the development of adequate infrastructure for the production of chips on the continent. This is as much a long-term and capital-demanding process as reducing energy dependence.

WHAT DOES THE PRIVATE SECTOR THINK AND EXPECT FROM THE FUTURE, AND WHAT IS EXPECTED FROM IT?

Representatives of Siemens, Porsche, Interzero and Heliot spoke about sustainable business models, digital and green transformation, as well as business in times of crisis.

The main issue that “tortures” large companies, which operate in the region, but also in Europe and the world, is how to adapt to the changes that the development of society brings, while maintaining the old values on which the entire system rests. They are trying to maintain their recognition on the market, old customers, but also to attract new ones. How to combine the new and the old, and make everything sustainable.

The main challenge they face is sustainability. When we talk about sustainability, we mainly mean sustainability aimed at reducing the effects of climate change. Most large companies operating in the markets of several European countries have dealt with these issues through the introduction of green policies in their operations. So far, green policies for a number of companies have meant planting trees, cleaning parks and public areas, buying recycled paper, but this is just a grain of sand in a sand dune. Taking into account the current state of nature, as well as the energy source issues that all economies in Europe are suddenly facing this year, a more serious approach to green policies is necessary, both on the part of companies and the public sector.

THE ENTIRE PRODUCTION PROCESS NEEDS TO BE REORGANIZED TO BE SUSTAINABLE AND CONSUME LESS ENERGY, BUT TO BECOME CIRCULAR.

One company cannot achieve sustainability alone, it requires the participation of all interested parties, especially the public sector. Companies expect governments to become more actively involved in this process by taking action, which may include tax incentives, setting short-term and long-term goals in the field of sustainability, but also by approving grants for companies that are transforming.

In addition to financial and regulatory incentives, it is important for companies in the transformation process that the public sector understands the importance of data. Nowadays, it is important to have accurate and timely information and data in order to make the right business decisions. Digitization has made it possible for companies to measure the effects of their operations, and to have real-time data. But they themselves cannot create large databases on which to make decisions. It is important that digitalization penetrates into every pore of society because it facilitates business in the public and private sectors, as well as everyday life for citizens. Of course, digitization also has negative effects, which we should think about and reduce as much as possible.

WASTE IS A RESOURCE!

It is important that everyone understands that there is no waste, that the waste of one individual is a value for another, and that they connect based on this in order to create a chain of suppliers, producers and consumers without waste. This is important to understand because of the goal of reducing energy and technological dependence on other continents. The lack of good and quality diplomacy in the European Union led to the fact that some resources in Africa were taken over by Russia, China and other Asian countries. This sent another message to European officials, namely that it is necessary to change the way the EU’s foreign policy is conducted.

The tone of representatives of institutions, as well as representatives of the private sector, was not positive. Difficult times are inevitable, but it is important to prepare well for them. Investments in sustainable and green energy sources are one of the ways to secure Europe’s good position in the world in the long term. However, it is necessary to make sacrifices in the short term, since there is no easy and quick way to solve the challenges and problems that Europe and the world are currently facing.